I never figured out what the message here was. It looks to me like this must be a place where formally dressed men from another era will steal your children, but that doesn’t seem right.

Catalan dogs are better behaved than their owners, if this sign is any indication. “I’ll wait here,” says this little terrier outside a supermarket. 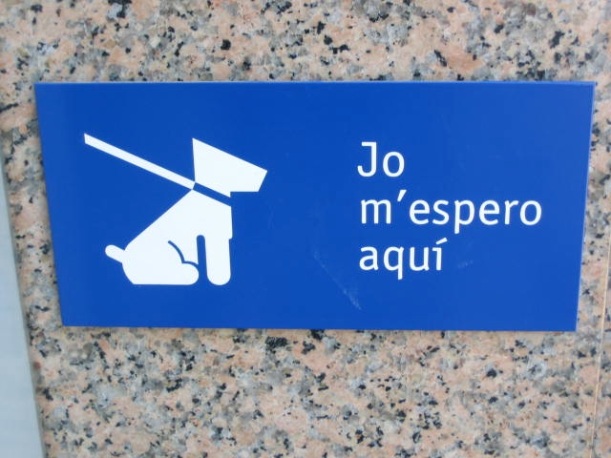 Welcome to Crazy Sign Week! Since I’m trying to take it easy (doctor’s orders), I won’t be running around and having adventures with which to entertain you all. And yet, content must be posted so I’m posting some of my favorite signs from my travels.

This the public toilet sign for a shopping mall near Le Kremlin-Bicètre, an area just south of the Paris border. I like everything about this sign because it made me think so much the day I saw it: Why is there a chess pawn on top of a garbage can? How are those people’s heads staying on? Can you even roll a wheel that has a huge gap in it?

I don’t get Halloween. Like most holidays, I think it’s fine for children, but the adult appeal of dressing up as something or someone you are not makes no sense to me. (And don’t get me started on “sexy” versions of pop culture characters since I find that trend totally disturbing.)

All this being said, I do like when people come up with something clever like the two dudes below who are dressed as French Kiss.

My friend Mark once wore the best costume I’ve ever seen in person. It was a piece of cardboard covered in tin/aluminum foil with two holes punched out of the top corners and a piece of string threaded through the holes so that he could hang the sign around his neck. In the center of the board, he’d written PLAN in black marker and I laughed and laughed and still think about it to this day, some ten years later. (Highlight for joke: he was A FOILED PLAN.)

It’s The Great Pumpkin, Charlie Brown is the Peanuts Halloween special from 1966. Despite this being waaaaaaaaaay before my time, this holiday classic has aired every year on network television and still gets pretty good ratings. My favorite parts all have to do with Snoopy (him howling at the moon is a high point), but this clip of his WWI flying ace is pretty good too (and oddly dark for a kids’ story).

The other day, I was waiting for a bus in the Place de la Nation for maybe ten minutes when the sun crested over the buildings behind me and bounced across the plaza and lit up a painted “1984” across the way. My first thought was of George Orwell and how I need to investigate what, if any, connection he has to Paris. I’m sure the marking refers to the year the building was constructed or something equally prosaic, but I do like to let my imagination wander. It was a good day.

My elementary (grammar) schoolday started at 9:05 with a selected fifth grader leading the student body in the Pledge of Allegiance. I still remember it:

I pledge allegiance to the Flag of the United States of America, and to the Republic for which it stands, one Nation under God, indivisible, with liberty and justice for all.

The root of “allegiance” is Middle English and is related to the feudal system word “liege.” Now that I know better, I strongly believe that this kind of repeated exposure to a belief system that may not be shared by everyone is morally wrong. Luckily, I didn’t buy into their jingoism. U-S-A! U-S-A!