Walking down this street, you couldn’t be blamed for thinking you were on the Rue Montmarcel. 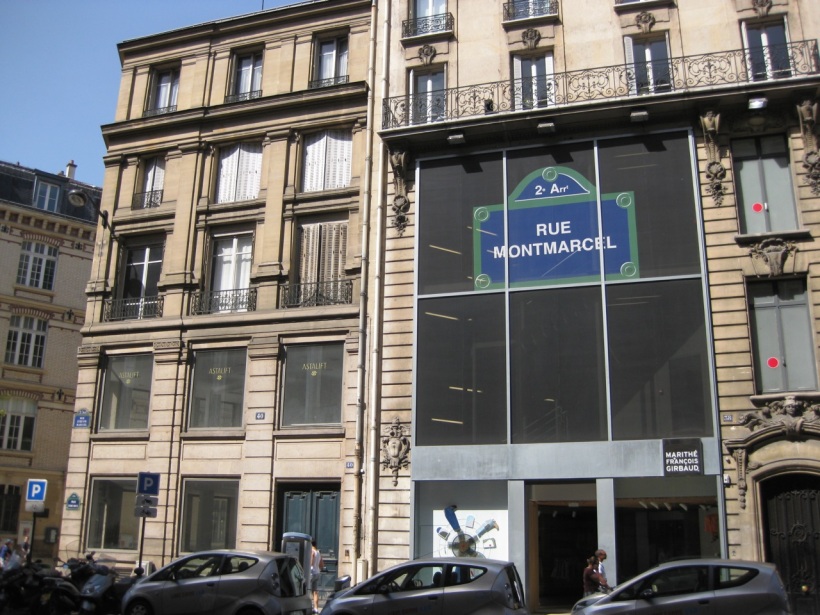 When I first noticed this misdirection, my French Spidey sense went off because the name didn’t sound right. Closer inspection of the actual street sign on the lower-left corner of the building reveals that this is, in fact, Rue Étienne Marcel in the 2nd.

According to a sweet book I have, Paris dictionnaire du nom des rues by Jean-Marie Cassagne, Étienne Marcel (1310-1358) was the provost of merchants and a mayor of Paris. Most memorably perhaps, was the role he played when he tried to get the young French dauphin, Charles V (later known as “The Wise”) off the throne in favor of his buddy, Carlos II de Navarra (known as “el Malo” [the bad]). Marcel opened the gates of Paris to Carlos and his band of troublemakers who overran the city, but he didn’t live to see all the havoc they wreaked as Marcel was killed by an arrow shot by city alderman Jean Maillart. (And I thought city politics was tough on THE WIRE.)

Further research reveals that all of this has to do with the Hundred Years’ War and a lot of stuff that I find really confusing. As has been mentioned on the Internet before, it’s pretty sad that I can keep track of several generations of fictional families like the ones in the ASOIAF series and the wars, battles, skirmishes and petty jealousies that they harbor, but I have a hard time keeping track of all these European kings.

In case you’re wondering, the jerks who are responsible for confusing people by making up a street are Marithé + François Girbaud whose flagship clothing store is behind the sign. You can see their typically French webpage here. (The French part is that it has auto-playing music, something the French don’t seem to understand is immensely annoying.)

Moral of the story: never open your gates to a Spaniard. Seriously, they’re all assholes and may end up getting you shot with an arrow.

2 thoughts on “Rue Montmarcel in Paris”