I derive a lot of pleasure from writing my Spanish screenplay, but I realized that so much negativity should be countered by something positive, so here’s my French screenplay about real things that happen to me which make me love France. 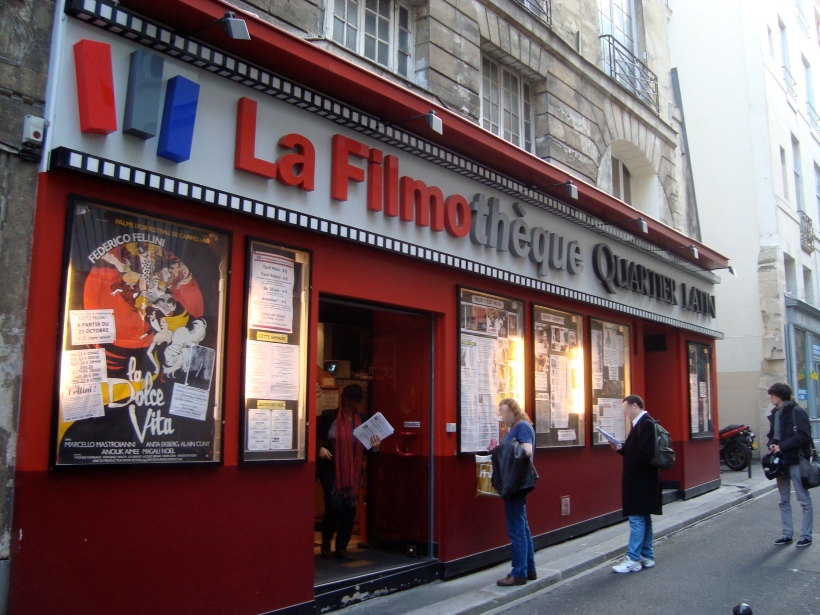 GIRL arrives at the Filmothèque du Quartier Latin an hour before the screening of BUTCH CASSIDY AND THE SUNDANCE KID. She is the only person outside the closed cinema and pulls out her ebook to wait for the box office to open.

Three-quarters of an hour later, GIRL‘s still at the front of the line, now with ticket firmly in hand. There is a GAGGLE OF PEOPLE behind her, including one very distinctive OLD LADY, shoulders hunched, wearing a long teal wool coat. GIRL is still reading.

What I like about Westerns is that the men are so handsome.

GIRL looks around to see who the woman is addressing and, seeing no possible candidates, thinks it might be her.

The men, the men! There’s something about these men in Westerns that’s so… evocative of… men.

Uh, yes. The men in Westerns are men.

It’s not that other men aren’t available.

OLD LADY juts her jaw in the direction of the other line that’s formed, one for THE SOUND OF MUSIC. OLD LADY rolls her eyes.

But some kinds of men just can’t be in a Western. I don’t have any use for those kinds.

Well, you can’t do much better than the two in this movie. Newman and Redford were better looking in other pictures, maybe, but they’re almost perfect in this one. And it’s funny.

Comedy! pftt! It’s THE MEN I’m talking about. The men!

Well, I am not disagreeing. I agree with you. The men are something special.

The OLD LADY finally relaxes her shoulders and directly addresses GIRL for the first time.

The matter settled, the OLD LADY smiles and gazes off into the distance. GIRL looks down and smiles too, but this time it’s the OLD LADY she’s appreciating, not the men.