I own one chair and a helluva lot of boxes.

Wednesdays, I explore the linguistic origins of the same word in different languages.

It’s moving time again, so my life has become about boxes and packing and rediscovering things long forgotten. (Someday I will share with you how many brand new spatulas I own. You will be as shocked as I was unless you also have more than a dozen of the same unused kitchen item.)

EN → box — a container with a flat base and sides, typically square or rectangular and having a lid. ORIGIN Old English, via Latin from Greek puxis [small box].

What? I have no idea what’s happening here. It’s a truly baffling day when the Spanish word is the most logical of the bunch.

Additional confusion: the English and French both come from the same word but are spelled differently. This is apparently acceptable, I’d guess partly because the Greek alphabet doesn’t have a 1: 1 with the Roman one, but also maybe because there weren’t standard spellings of things in Ancient Greece. (At least, that’s the impression I get from books like David Crystal‘s which feature cabals of academics / priests deciding how things will be written.)

Botanical note: I am very bad with plants and don’t know the names of most green growy things, so I never considered that boxwood trees are trees with good, hard wood that people used to make boxes out of. Sometimes, if you don’t look too hard, English is totally easy. Other times, not so much.

I actually walked in here one day and told them their sign was wrong and they told me to get lost since they knew better.

Do you think you’re efficient? Are you able to keep an eye on your breakfast while taking a shower? I didn’t think so, but now you can! For only 699€ a month, you can do everything in one space instead of wasting all that time walking across rooms. Toilet sold separately. (Really. It’s in the hallway.)

Do you ever take a bath and wonder, “Man, I really wish I could look at the lower half of my body while I’m wet and naked”? Well, now you can! This bathroom comes equipped with the latest in vanity technology — a mirror at crotch level! 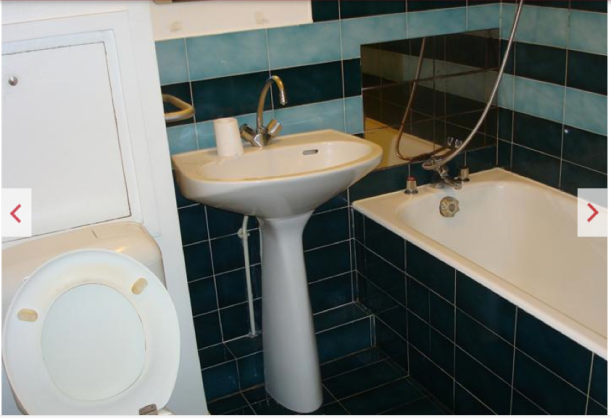 Ladies and gentlemen, look at this kitchen! It’s a chef’s dream! The completely renovated space has all-new appliances including a dish washer, oven with electric cooktop and a full-size fridge! There’s ample storage for all your gadgets and culinary tools. It’s a perfect space! Except the living area is the size of a full mattress and a twin mattress squeezed together. (That is to say, there is no space for actual living.) 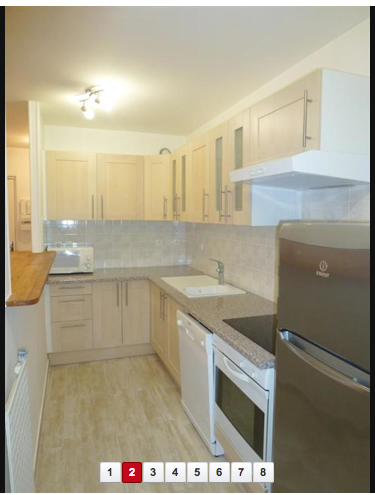 This one may be a personal choice as I don’t like humanoid anythings — dolls, puppets, mannequins, clowns, etc. — possibly due to mean tricks my asshole siblings pulled on me when I was little … but this poorly translated ad totally bothered me for days since I couldn’t stop imaging the horror of what it depicts: a puppet greeting you at the door every day. It’s like some sick Stephen King business.

Pantin is a town outside Paris…and a kind of articulated shadow puppet thingy.

Finally, two places that actually have many things going for them. In the first, sadly, one of those features was not an elevator (it’s a sixth floor).

In the last, the problems are that I can’t afford it and I also hate spiral staircases, but man, those windows are something.

→ Don’t know if anyone actually reads these things, but I’ve updated my About page and added a Features page that collects all the recurring stuff. I’d appreciate any input on if this was a good use of my time or if people prefer to navigate with tags.

→ A recreation of the famous “degenerate art” show held in Munich in 1937 is at NYC’s Neue Galerie through the end of June 2014. An interview with the curator on WNYC gives lots of historical perspective and is worth a listen. A review of the show, with more context is here. Finally, the NYT on the making of the exhibit.

→ Speaking of Nazis and their art-thieving, VANITY FAIR reports on that trove of art stolen by a Nazi found in a Munich apartment.

→ A BBC reporter and film crew got a tour of the art. Can you imagine having this stuff in your house?! We had art in my house growing up, but this stuff is ART. Like, super serious good stuff by actual masters. A. R. T.

→ The Paris smog situation was really dire. On the days that it was worst, I got home and felt like I’d smoked a pack of cigarettes without any of the actual fun of smoking a pack of cigarettes. Since the pollution was higher than in Singapore, I guess I wasn’t exaggerating (see left). An explanation via Gizmodo says that, in addition to the weird weather patterns we were having, France’s love of diesel engines is at the root of the problem. (Lots of interesting links in the story.)

→ The NYT hasn’t gotten my memo about Catalan cooking; their story about fideuà is mostly correct… except that they spell the name of the dish wrong. It’s made with fideus [noodles], not called that. This would be like calling paella “rice” or a cheeseburger “meat patty.” Angry sigh.

→ My sister suggested that maybe the translation of the Latin mulĭer to “mistress” is less sexist than I thought. My dictionary has the primary definition as “a woman in a position of authority or control,” so maybe it’s my mind that’s corrupt and not the Spanish language. (Regardless, Spanish wouldn’t have won that day.) (Also, Spaniards are totally sexist, so I doubt that she’s right but concede that it’s possible.)

Look at the # of retweets/faves!

→ I love how the “fact” at right is presented, as if there’s ONLY ONE place in ALL OF FRANCE that does this. I’m sure variations on this happen all over. For instance, I know that MOST places in the tourist-frequented areas of Barcelona charge foreigners more on principle, so I’m not sure why UberFacts thinks the French would be so different. I mean, the French are better than Spaniards, but not by that much.

This is a combination that I distinctly remember “inventing” when I was a kid and I was disappointed to learn years later that many, many people had grown up having grilled cheese sandwiches and tomato soup served to them by their mothers. I do think that it’s a Midwesternism though, so I’m going to expand the definition of my invention to include that it’s part of the hive mind and leave it at that.

Let’s never speak about how ugly this bowl is.

I was inspired to reprise this classic childhood treat after finding single-serving containers of tomato soup sold by some German company in the “weird food” section of one of my local stores and by the pilot episode of FX’s new series, FARGO, where two adult characters have this combo for lunch.

This is where I tell you that despite most of the action in the story, both the show’s and the 1996 film’s upon which it’s loosely spun off, taking place in Minnesota, Fargo is actually a town in North Dakota. Being an ex-Midwesterner, this kind of flagrant disregard for our state boundaries and identities pisses me off. Now everyone who watches the show is going to have an even worse idea of where things are located in that vast area that’s alternately tundra and arable land and where people do talk with weird accents, albeit not all the same one.

It’s on the eastern border with Minnesota.