There are two creatures in my new apartment. The first one I call T-rex toilet. 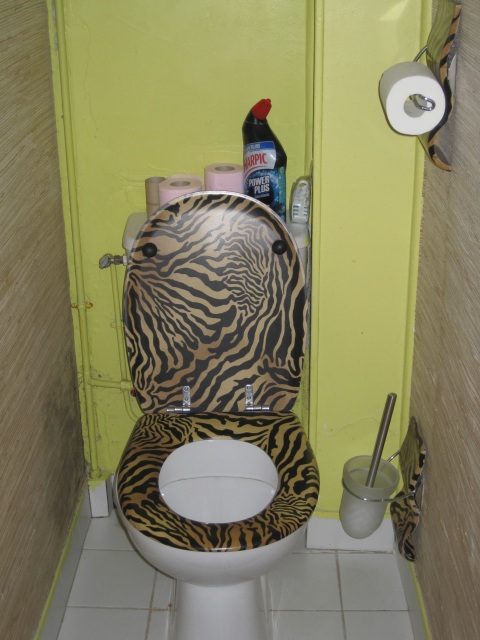 To avail yourself of the toilet paper located in the dispenser, you must be both very tall and have very short arms. I have since moved it to a more easily accessible spot. (This T-rex and I should switch places.)

The second is flamingo shower. 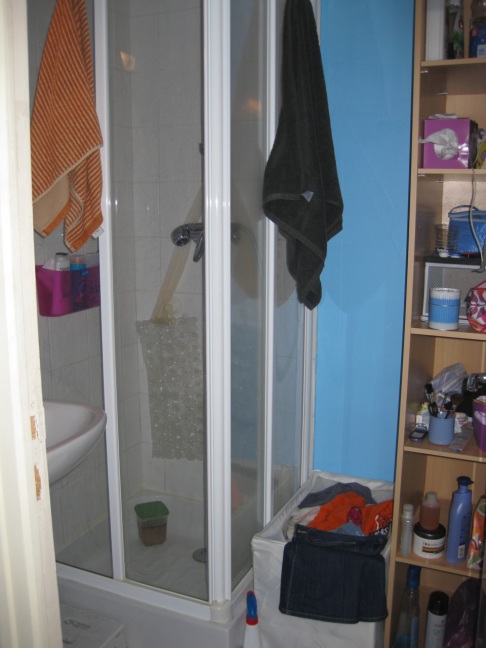 It is so tight in here.

The only way to clean the bottom half of your body, normally achieved by leaning over, is to raise those parts to your hands, kind of like a flamingo. This results in an occupant (me) feeling a bit silly while standing on one foot and scrubbing the opposite foot at waist level. This is a place where an oddly placed mirror might actually come in handy.

Flamingos are born white and turn pink because they eat shrimp.

If you’ve seen the show, you know what I mean. If you haven’t seen it but don’t like stories that end “because God wanted it this way” or “the character was Jesus all along,” I wouldn’t recommend it. Regardless, this toilet in a restaurant near the Opéra Garnier was weird enough that I was compelled to pull my camera out in a public restroom. 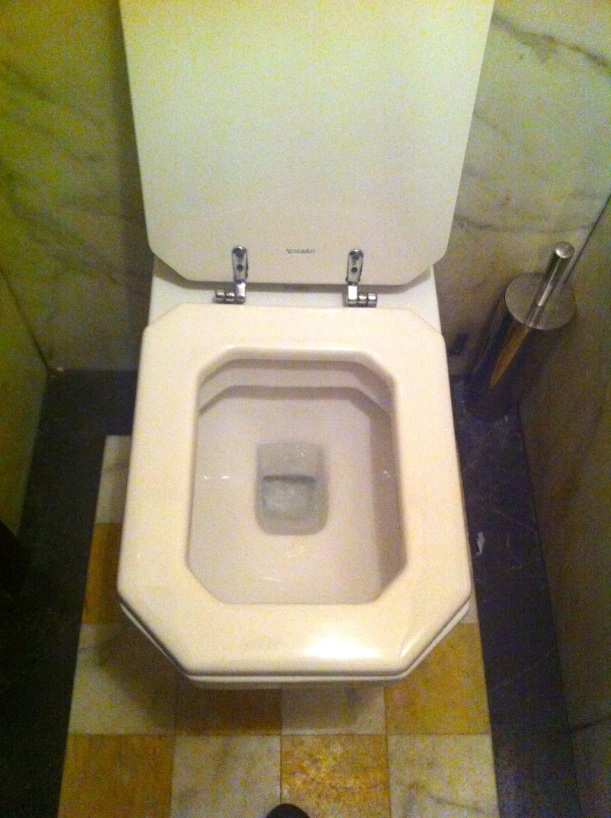 I like to imagine that in a parallel dimension there’s a version of me who consumes all the media and then tells this version of me what stuff to avoid (like LOST and BSG).

Wait, maybe *I’m* the version who has to suffer through all the Christ parables in pop culture so that *another* version of me doesn’t have to.

Whoa, maybe *I’m* the Christ figure in this scenario, sacrificing my own happiness and need for narrative cohesion and closure so that some other version of me lives in a world of well plotted original stories. This kind of cosmic irony may definitively prove or disprove the existence of a higher being, though I’m not sure which.

Funny Things Happen on the Way to the Opera House

Every Wednesday, I explore the linguistic origins of one word in different languages I speak. 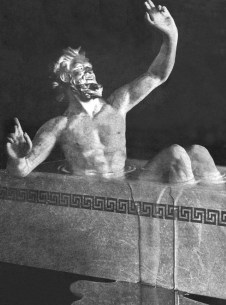 Exactly like it happened to me. (Except it not being a bath. And me not being a man. Or Greek. Or bearded. Or super buff.)

Well, that was surprising. Not long after an exchange with Suzanne about what things they’ll find odd when they move back to Canada, I found myself a bit confused in an American shower because I’d unknowingly adapted to those European hand shower nozzle spray things. It was weird to realize that I’d have to turn my actual body around if I wanted to rinse off instead of moving the nozzle around me. A little difference, but one that I never would have expected to get used to since I really hated those damn things for a long time.

Then, like Archimedes before me, I exclaimed “Eureka!” when I realized that there was both a Euro Adapter moment and a Word Mystery just over my head like an idea bulb.

EN → shower head — a perforated nozzle that distributes water over a focal point of use, generally overhead of the bather. ORIGIN of shower: Old English scūr [light fall of rain, hail]. 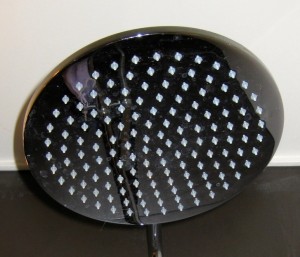 Spanish Note: the definition given is the seventh of seven listed by the RAE. The first one is for the edible plant “artichoke” but once I learned that I showered under an artichoke every day, this definition became my favorite. If you look at one with this in mind, you can see how it resembles the cross section of a ‘choke.

Today’s Winner: Tough again today. I came into the WM already favoring alcachofa, but I hadn’t known that pomme, a much-used word in French, meant “fruit”. Then I imagined Richard Burton saying scūr (his reading of Beowulf is the only time I’ve actually heard Old English spoken) and I really like the sound of that…so I don’t know. Spanish, I guess? Other opinions welcome.

Since I apparently only reference SNL or Monty Python

It’s worth mentioning that Archimedes is the one who finally initiates the winning goal in the “Philosophers’ Football” sketch, easily my favorite football match of all time. It almost makes me feel bad for the Germans to lose so badly. (Just remember: Don’t mention the war!)

[Ed. The editorial board has determined that a FAWLTY TOWERS reference counts as MONTY PYTHON, so double negative points for lack of originality.]

What did you come up with? Depending on your interests, you may have gone paella-tapas-José Andrés or guitar-Aranjuez-Rodrigo or bullfights-Hemingway-war. I’d run through a lot of options before getting to lace-Sevilla-mantilla but that’s because I’m not into things that are hard to wash (delicates = the worst) and I’m a bad Spaniard.

I’m thinking about lace because a recent episode of “Project Runway,” a fashion competition show, sent its contestants to European fashion capitals for inspiration. The person who went to Barcelona chose lace to represent the intricate design work she saw on buildings around the city. (You can see the end result here.)

I would never have connected lace to Barcelona or Catalunya (it’s closely associated with the regional clothing of southern parts of Spain), but I was reminded of a cool thing I saw at the CaixaForum in 2007. 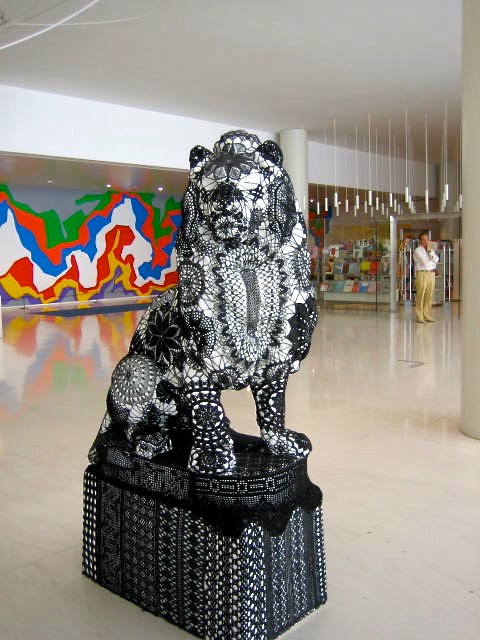 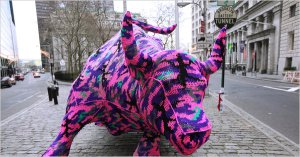 Looking back at this, I thought of graffiti knitters (also known as yarn bombers), people who knit cozies for things found in public (phone booths, statues, street lamps, etc.). The work is pretty funny and just looking at photos of their finished work make me feel all warm and fuzzy.

The CaixaForum is a free art space in a former textile factory near Plaça Catalunya. The exhibitions are hit and miss but they have a great museum shop and wonderful clean bathrooms.

A while back I wrote about how much I like Quartino Pizza in the 4è. Today, I want to highlight that they also have a great bathroom. Technically, you can get away with using it if you don’t patronize the shop, so if you’re in the area and need a clean bathroom, stop by. (You’ll probably still get some pizza though. It’s really good.) 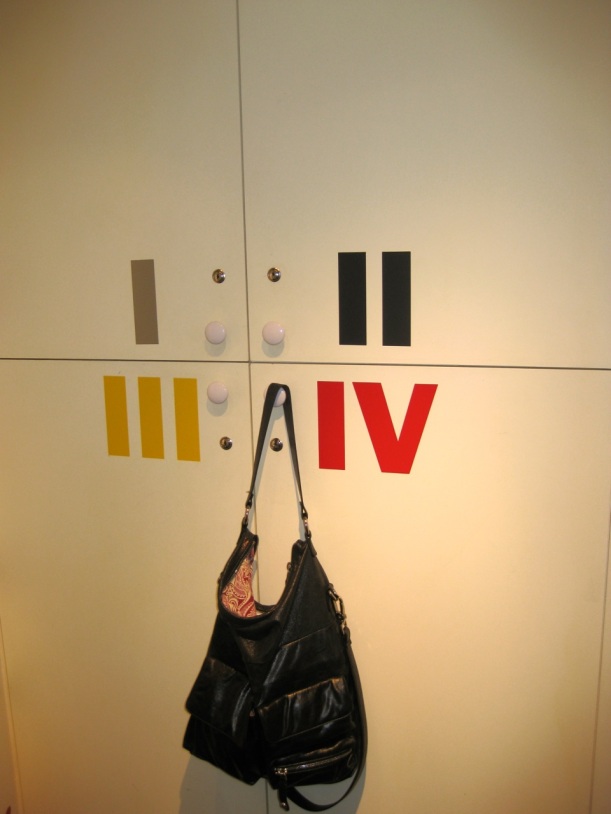 So many hooks to hang things on! 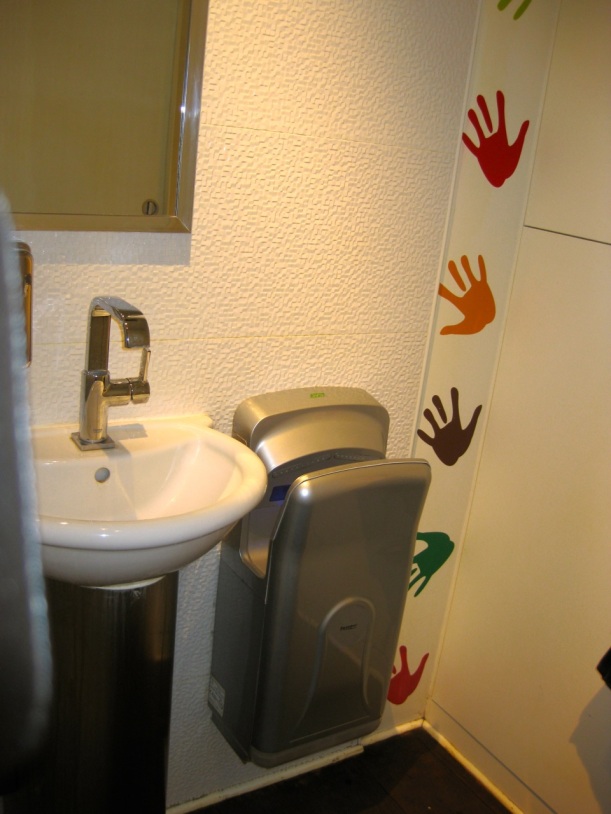 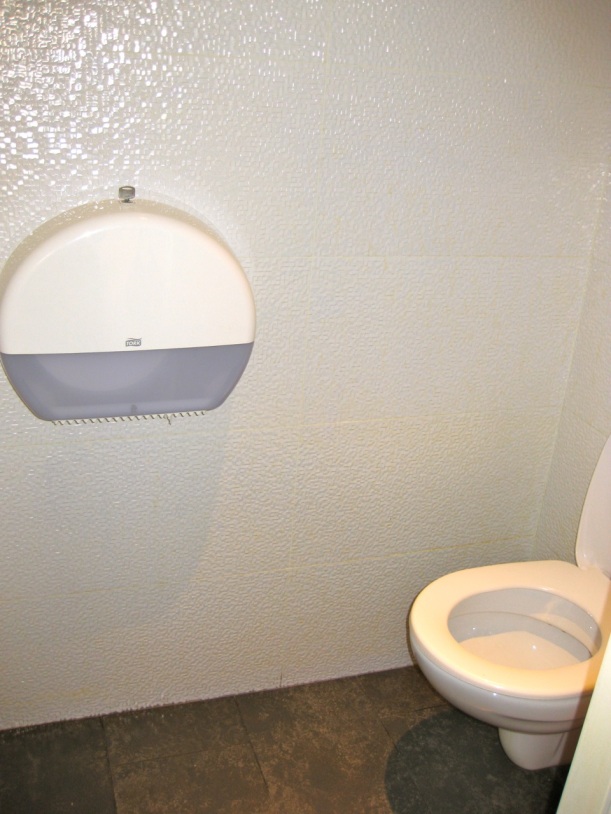 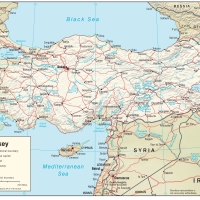 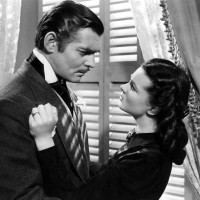 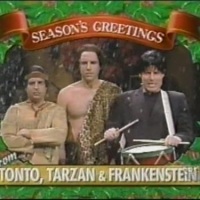 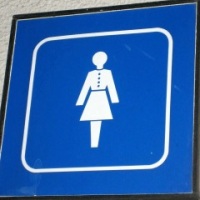 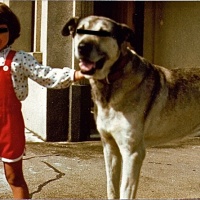 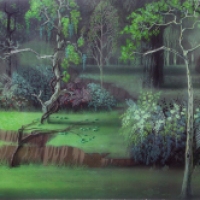